No, I haven't got myself addicted to illicit drugs, or even legal drugs for that matter. I don't drink alcohol, I don't smoke or inject anything, but for a while now, I've been taking ibuprofen for headache and back pain. 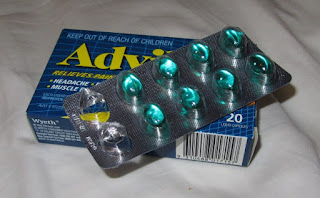 The problem is that instead of just taking it occasionally, I got to the stage of habitually taking 2 with breakfast and 2 with dinner, every day, as a precautionary measure because when I don't take it, the pain comes back...

Unlike codeine, which is often combined with ibuprofen to make addictive extra-strength pain relievers (which featured on the ABC 7:30 report last night), inbuprofen is not an addictive drug, but it is the part of the combined pain relievers that actually causes major medical problems if used continuously and excessively.

Ibuprofen is not supposed to be used continuously, as people addicted to codeine do, and I had been until about a week ago.

I've been aware of the potential medical problems and trying to convince myself that it's not that bad because the instructions say that 6 per day is the maximum dose, but I've only been taking 4. About a week ago, I decided that I needed to face reality and stop taking ibuprofen for a while. I'm just going to have to toughen up and get used to living with the pain.

If my sciatica becomes bad enough to be debilitating, I'll have to take it again, but only for a short period until the sciatica settles down again. That's how I originally used it, and that's how I've get to go back to using it.

That means that I'm currently adjusting to living with dull to moderate levels of pain in all sorts of places including my back, and the occasional bad headache or migraine that goes along with cutting out ibuprofen for a while.

My work productivity is shot because my concentration is shot, so I'm stressing about the work that I'm not getting done. I struggle to get out of bed at a reasonable time, but after a few days I'm actually finding that I'm more aware of being tired earlier in the evenings, which might help me to finally start getting my sleep pattern under control.

It probably comes as no surprise, then, that I didn't go out last night even though it was Melbourne Cup day. Aside from working towards my plan to go to the Kurri Kurri Nostalgia Festival next year, I have no specific plans to go out en femme soon. I need concentrate on getting myself sorted out, and if opportunities present themselves along the way, I'll try to take them.
Posted by Alice at 12:00